skip to main | skip to sidebar

Everyone, no doubt, is unique; but some are more so than others, and Saul Steinberg, who died last week at 84, was very much so. There really was no one like him in the annals of American art. What was so remarkable about him was not his genius as a cartoonist or his qualities as a "fine" artist, but the way he combined both within the same body of work. He didn't flip between a serious and a funny side. Both were intrinsic to the same images, which entranced his audience for decades. But this also delayed his recognition as a major American artist. Even now it's not as generally accepted as it ought to be. His friend, the late critic Harold Rosenberg, claimed that "in linking art to the modern consciousness, no artist is more relevant than Steinberg. That he remains an art-world outsider is a problem that critical thinking in art must compel itself to confront." That problem is shrinking, but it still remains.


One magazine, the New Yorker, made him famous. His last cover appears on it this week. It is his 86th, apart from innumerable drawings and dinkuses. By far his best-known cover, a classic commentary on the provincialism of great cities, ended as a poster on tens of thousands of walls. It is the Manhattanite's view from New York City: Eighth and Ninth avenues wide in the foreground, a strip of Hudson River, a smaller strip of New Jersey, the rest of the U.S. missing, and in the far background some mere dots marking Los Angeles, Australia and Japan. 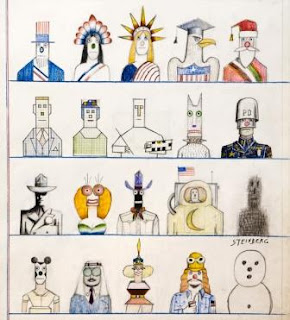 It's the kind of image that only an expatriate could have made, and Steinberg, before anything else, was an expatriate. When dictators in the 1930s ranted about rootless Jews, Steinberg was what they had in mind. Born near Bucharest, Romania, the son of a printer (hence an early fascination with type), he studied architecture in Milan in the early '30s. He never designed a real building, but he was to develop an exquisite sense of architectural convention, of stylistic parody, that shows in the dream skyscrapers and iron galleries of his later cityscapes. In 1941 he made his way to Lisbon and from there to the U.S. With difficulty, and with a "slightly fake" passport that he doctored with his own rubber stamp, he reached Miami in 1942, and his definitive expatriation began.


America fascinated him. In his work he turned it into a country as schematized, imaginative and compelling as the America of the Weill-Brecht opera The Rise and Fall of the City of Mahagonny: flat horizons broken by buttes or movie palaces, bulbous baroque autos, all-leg girls and cowboys teetering on their high heels like stilts. Never vagrant or fussy, always economical, his line described conundrums that were at the heart of an artist's identity concerns: a little image, for instance, of a man with a pen whose drawn nib is drawing himself. To Steinberg, each drawing remade its author. It was both a mask and a card of identity, and a proof of existence as well. Never an expressionist, he liked, he said, "to make a parody of bravura. I wish to create a fiction of skill in the same sense that my writing is an imitation of calligraphy: fine flourishes that can't be deciphered, official stamps no one can read." What he didn't know about the semantics of style wasn't worth knowing. 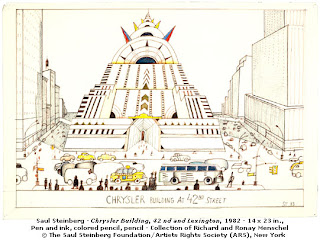 An artist of immense detachment, he was also capable of the most cutting insights. His New York streets populated by freaks, stone-faced cops and ghastly youths of both sexes in Mickey Mouse hats are proof of that: the Mickey Mouse face, he told an interviewer, is "without character or age; for me it represents the junk-food people, the TV children, the spoilt young ones who have all their experiences, inferior as they are, handed to them on a plate." Nobody could say Steinberg was a particularly warm or approachable person. He loathed mediocrity and made no secret of it. He simply knew too much, and in his death he took that knowledge with him. He had no equals. Now he has no successors.
Posted by rock blondsky at 15:11 No comments:

A.L.F, ringpulls and rootbeer are also keel and I want to have my own sitcom.

Check out some of my old posts